From May 23-25, the LMU American Institute will join forces with University Ca’ Foscari in Venice for the Aesthetics of Restraint Interdisciplinary Symposium. At the core of this conference is a powerful question that surfaces in art, philosophy, and politics, from historical analysis to contemporary debates, namely the charged relationship between individual freedom and creative development on one hand the traditional, rule-based structures of the respective disciplines on the other. 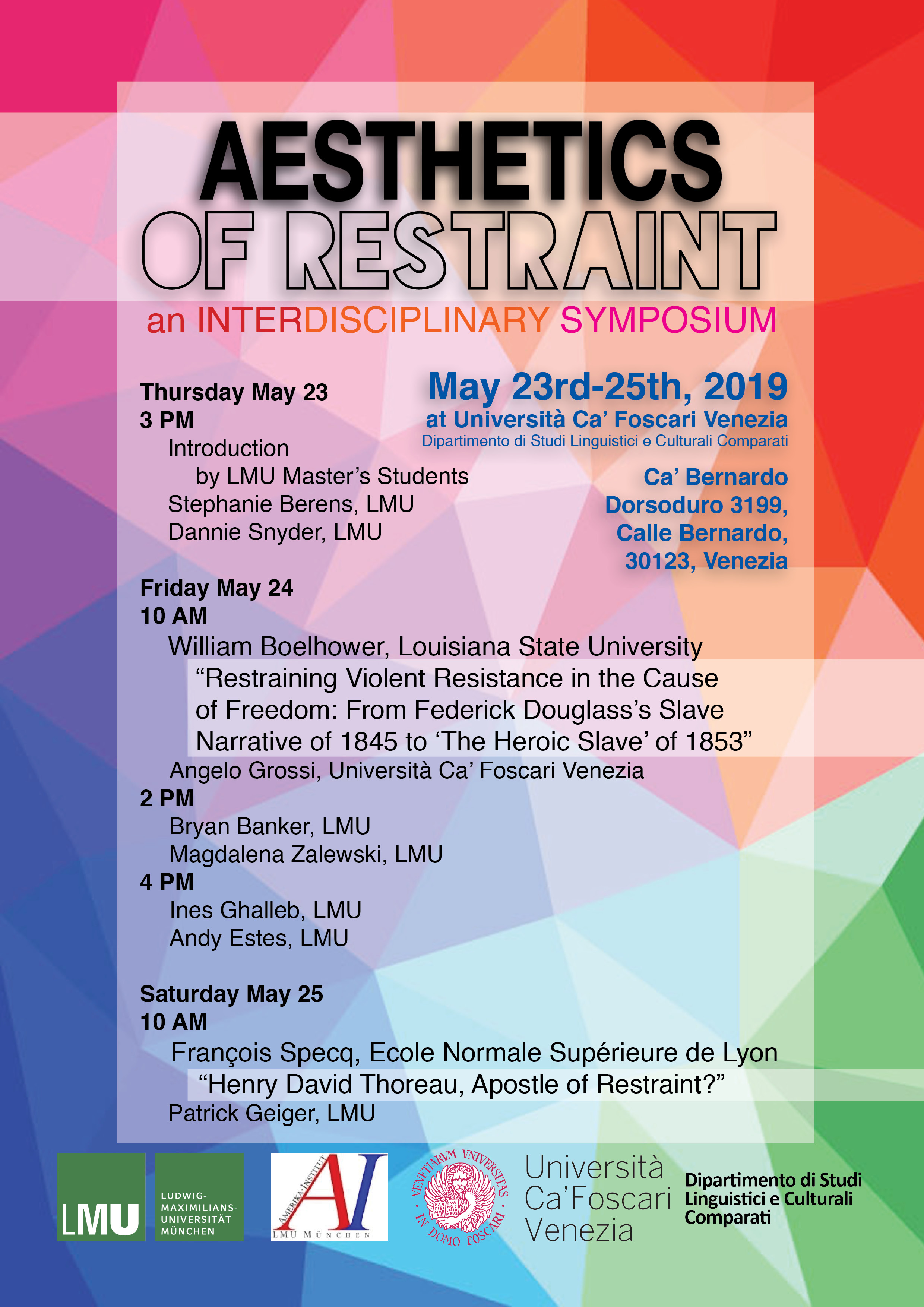 Between Prof. Dr. Benesch’s hand gestures and the still strips of light seeping through the vertical blinds, ten Master’s students chatter, scribble, pause, and ponder. It is the last official meeting before we all move from room 106 to University Ca’ Foscari in Venice, along with five other PhD students and faculty members from LMU, for the Aesthetics of Restraint Interdisciplinary Symposium. Master’s students throw more ideas around and throw more drafts into the bin as they plan an introduction to kick-off the three-day conference, attempting big questions like “What is aesthetics?” and “What is freedom and restraint?” in a mere 20-minute presentation. Co-organizer Giorgia Tommasi, Assistant Professor, smiles, lips open, waiting for the right moment to voice suggestion and agreement. It is an exciting day.

At the core of this conference is a powerful question that surfaces in several fields, from literature and the arts to philosophy and politics, from historical analysis to contemporary debates, namely the charged relationship between individual freedom and creative development on one hand and the traditional, rule-based structures of the respective disciplines on the other. While this tension encompasses all modern societies, it seems to have significantly permeated through every level of U.S. American culture, where it has led to heated confrontations between individuals or single groups and controlling forces, be they genre restrictions, conventions, or regulatory state authorities. This tension is present in the interaction between the philosophically-understood free will of the individual and the normative influences of collective, societal regulations, between the free speech guaranteed by law and the rules that control public communication. What may seem like both a purely formal and academic issue has actual repercussions across social, political, and cultural domains. Investigating through the lens of restraint provides a different perspective to the far-reaching questions that are constitutive of modernity.

The symposium will take place from May 23-25 at Ca’ Foscari’s Department of Linguistics and Comparative Cultural Studies. On Friday, we have our first keynote speaker: William Boelhower, a Visiting Professor at Ca’ Foscari from Louisiana State Univeristy. His talk is titled, “Restraining Violent Resistance in the Cause of Freedom: From Federick Douglass’s Slave Narrative of 1845 to ‘The Heroic Slave’ of 1853”. On Saturday, we have our second keynote speaker: François Specq, Professor of American Literature and Culture at Ecole Normale Supérieure de Lyon. His talk is titled, “Henry David Thoreau, Apostle of Restraint?” Our presenters from LMU include Andy Estes, Bryan Banker, Patrick Geiger, Magdalena Zalewski, Ines Ghalleb, Stephanie Berens and Dannie Snyder. Speakers from Ca’ Foscari include Angelo Grossi. We are thrilled to have a variety of topics ranging from the Constitution to Facebook!

Check back in with the American Institute’s website for more news updates, including video footage of the talks, panel discussions and interviews! Also, find us on Facebook (Aesthetics of Restraint) and Instagram (aestheticsofrestraint) or via our hashtag on Twitter (#aestheticsofrestraint).